“LEAP” is an acronym for “Leaders Exploring Aspiring Promise”.   The Montessori Method educational pedagogy was created by Dr. Maria Montessori and her son, Mario Montessori who based her approach on scientific observations of children from birth to adulthood. Dr. Montessori was an Italian physician, educator, and innovator whose views focused on a child’s natural eagerness for knowledge. The basis of Montessori practice in the classroom is to respect individual choice of work, and uninterrupted concentration rather than whole group lessons led by an adult.

The Casa dei Bambini, or Children’s House was the first Montessori school that opened in San Lorenzo, Rome on January 6, 1907. Dr. Montessori’s learning materials and school’s success was acclaimed in Italy and spread to other regions. Dr. Montessori’s travels and writings gained her global recognition attracting many devotees. Her educational approach is widely supported with the development of more than 22,000 Montessori schools in up to 110 countries worldwide.

Many children at Montessori schools out-performed students who were in traditional educational settings according to findings by US psychologist across a range of compared abilities. Montessori teachers focus on personal development which produces more mature, creative, and socially adept children. The Montessori Method discourages traditional competitive measurements of achievement and concentrates on the individual progress of each child. With an emphasis on “practical life skills” children of different ages share the same classroom and are encouraged to collaborate and help one another.

I have been involved with the school and known Mrs. OH (Betty) and Mrs. Griffin (Sheila) for over a year now and have been nothing but impressed! These two ladies, as well as Ms. Eden and the rest of the staff, CLEARLY put their entire hearts and souls into this little school and I consider it a treasure for Rio Rancho! The environments are peaceful and handmade. There are animals everywhere and the children seem to happy, engaged, and respectful to each other, their teachers, and everything. Every interaction that I've seen or heard about between adults and and the children has been beautiful and one that I hope other places would adopt. The children are shown and then "invited" to try new things all the time and there is clearly a culture of kindness and compassion. This is truly an authentic Montessori school that is full with materials (though not overwhelming) and just a peaceful place to be. I especially the sweet dogs! I love that everyone is committed to doing things right- even when it requires more effort. I can't believe the children even sew and thankfully- they teach cursive!!! I absolutely recommend this school and the teachers and I love working with Mrs. OH and Mrs. Griffin. I have every intention upon staying involved with them for years to come!

We have been at LEAP since February 2019. Words can not express the gratitude we have for Mrs. Griffin, Mrs. “O”, Ms. Eden, our daughters lead teacher, and the other team members. They not only provide a safe and rich learning environment but genuinely love our daughter and the other students. This is certainly mutual! Our daughter, who has grown leaps and bounds, is eager to attend each day and we can work in peace knowing that she is very well cared for in our absence. Their high quality of care is absolutely appreciated as is their commitment to professionalism. Thank you LEAP for all that you do!

I cannot say enough good things about LEAP Montessori. I purposefully waited several months to do a review to make sure I could confidently stand by what I have to say. When we moved my four year old to LEAP 8 months ago he was having severe behavioral problems and was on the verge of expulsion at his old preschool. I couldn't have asked for a more kind and patient teacher for my child. Ms. Griffin has worked miracles! The change I've seen in him has been remarkable. Almost instantly they were able to refer me to other people and resources to help us with him at home too. He's now a thriving "normal" four year old, and he loves going to school. I have spent time in the classroom and Ms Griffin has created a wonderfully calm learning environment. The kids are active and engaged in their lessons and work. She clearly adores the children and loves what she gets to do every day. She also has great classroom management skills. As a former teacher myself, I've seen nothing about her behavior towards the children that is concerning. She does a great job at redirecting the kids while also reinforcing and reminding them the rules in a loving way. This school and Ms Griffin have been a tremendous blessing for our family. Any child would be a lucky to attend! 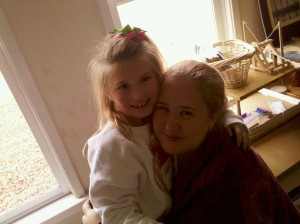 Mrs. Griffin is one of the Founders of LEAP International Montessori School, the Curriculum Coordinator, and she is responsible for all happenings on campus.

Mrs. Griffin is especially interested in Peace Education and has done extensive work with indigenous groups in North America.   Her background before she came to Montessori was in the museum world and outdoor education.

Mrs. Griffin is a native of New Mexico and graduated from Sandia High School.  She also spent a significant amount of time in Alaska and considers it to be her second home.

When not in the classroom, Mrs. Griffin enjoys spending time with her precious four-legged daughter, “Henri” and 2 well-fed rabbits.  She is an avid traveler and lover of labyrinths and geometry gardens and visits them often.

Mrs. Osoff-Hannagan is one of the founders of LEAP International Montessori School.  Except for a few years traveling and living abroad, she is a life-long, proud resident of the Rio Grande Valley.  Mrs. Osoff-Hannagan is a graduate of Highland High School and New Mexico State University with a Bachelors in Business Administration/ Management & Home Economics.  She has started, owned, and operated several businesses and has extensive volunteer leadership experience.

Mrs. Osoff-Hannagan first learned about Montessori education while stationed in Italy with her former husband and since has supported several Montessori endeavors.  In addition to serving as our Head of School she is also a licensed real estate broker with Coldwell Banker Legacy. She has been successfully helping people to buy and sell residential homes for the past 17 years.

In her spare time, she and her husband enjoy gardening.  She also sings in a choir, enjoys cooking, sewing, painting, playing with her elderly yet wise cockapoo, Minnie, and making Montessori materials and Montessori inspired jewelry